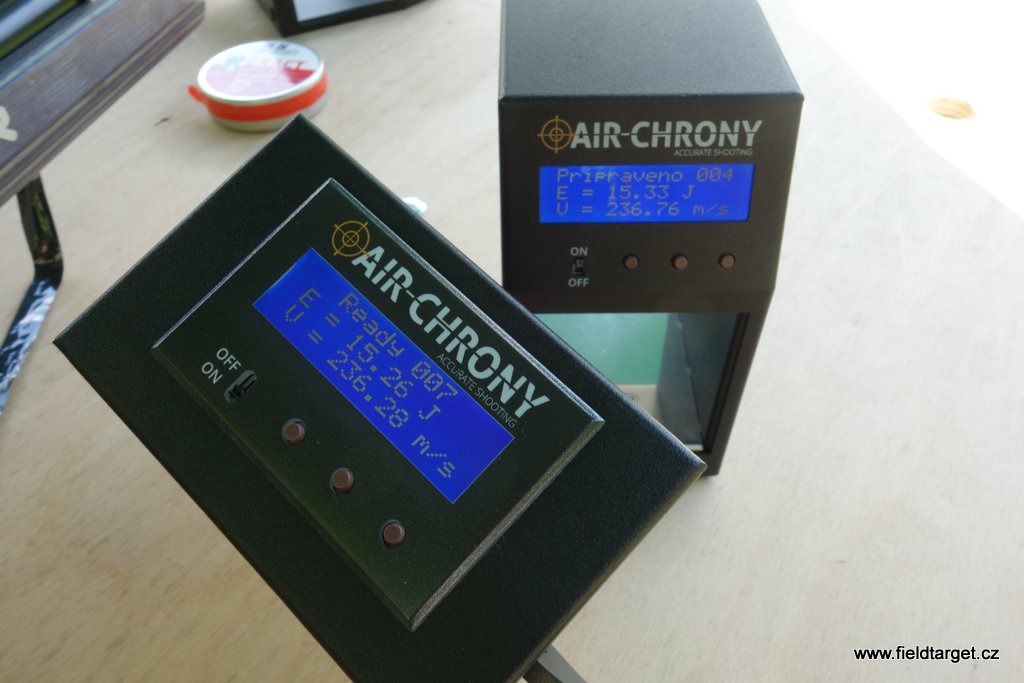 If you shoot for a long time, you will find that it is not enough to have only a rifle and devils.You can't do without other essential things that allow you to get better results, whether they make the shooting more accurate or have a positive effect by simply making the shooting itself more enjoyable. 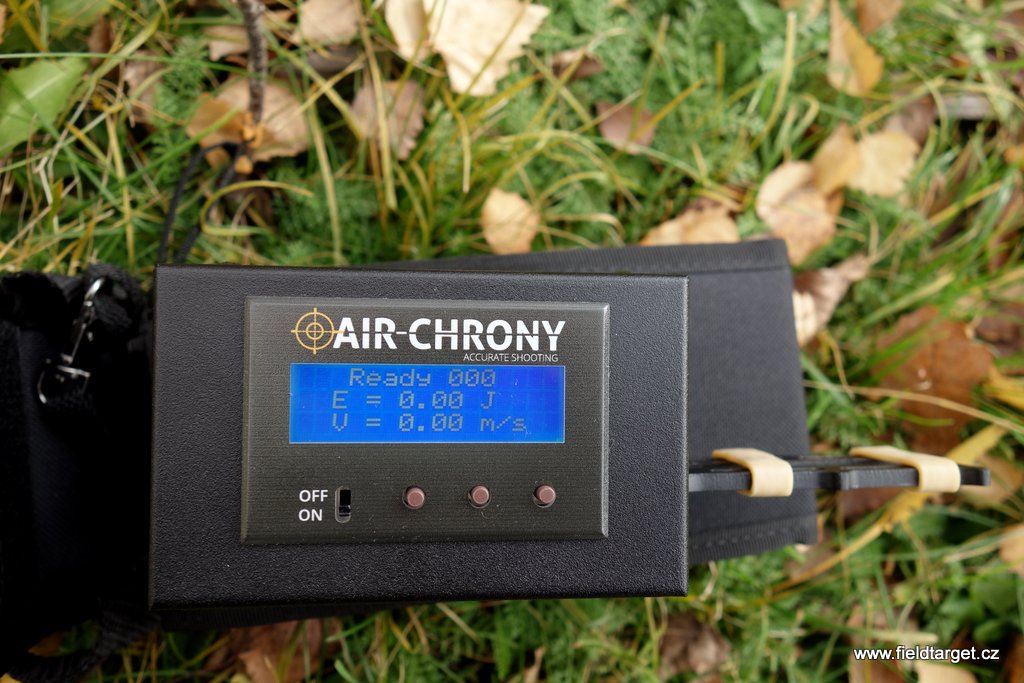 There are several reasons why we need to accurately measure the speed of a projectile. The first is of course a legislative reason. Probably no one wants to have unnecessary braids with the law if it is found that his weapon's energy exceeds the 16 Joule limit.

Likewise, at races, a shooter who gets over the legal limit during a checkout is excluded from the competition because it is against the law and rules and also because of the more favorable ballistic curve unfair to other competitors.

The second main reason for measuring the speed of the missile is the fact that each competitor wants to shoot as accurately and with as little dispersion as possible. And it has a very significant impact on the consistency of speed. The smaller the deviation in the speed of the fired pellets your weapon achieves, the less you will achieve the scatter pattern on the target. The prerequisite is, of course, high-quality ammunition with minimal weight differences, and if it adds a well-adjusted rifle, the wounds are then one another and the devils fly in the target through one hole.

When you hear a shooter talking about consistency, he usually utters something in the sense that it flies + 2 meters or that it is within 1%. This means that the rifle fires at operating pressure at a speed not more than 2 m / s from the mean. For example, all shots are between 236-240 m / s, which is such a reasonable prerequisite for accurate shooting, because the difference between a shot with a speed of 236 m / s and a shot with a speed of 240 m / s is at 30m distant target about 3mm target only about 5mm, which is roughly the diameter of the devil and it is practically negligible in outdoor shooting such as HFT. 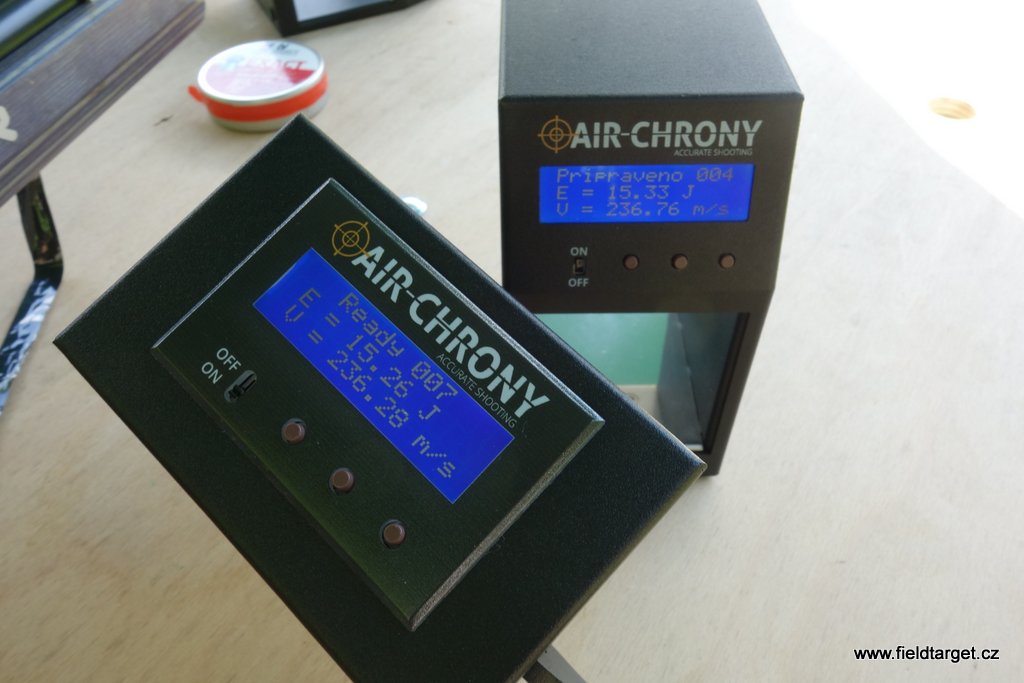 Otherwise, of course, it is better to have a rifle with the best consistency, just for that feeling. And to be sure, you need a device that allows you to measure the speed of the fired pellets and then follow the adjustment and maintenance of the weapon accordingly.

On the market you will find several instruments (shooting chronometers) that allow you to measure the speed of fired pellets. However, with a few exceptions, these are usually products designed for firearms in outdoor conditions, and the price and dimensions correspond accordingly. In the FT / HFT air world, perhaps the best known instrument is the Airchrony Mk3 chronometer, which is an official measuring instrument at top-level races, including the World Championship. However, the Mk3 version may not suit everyone. Although it is a relatively small and compact device, it is still possible to produce an even smaller and lighter variant, so small that it can be mounted on the barrel. 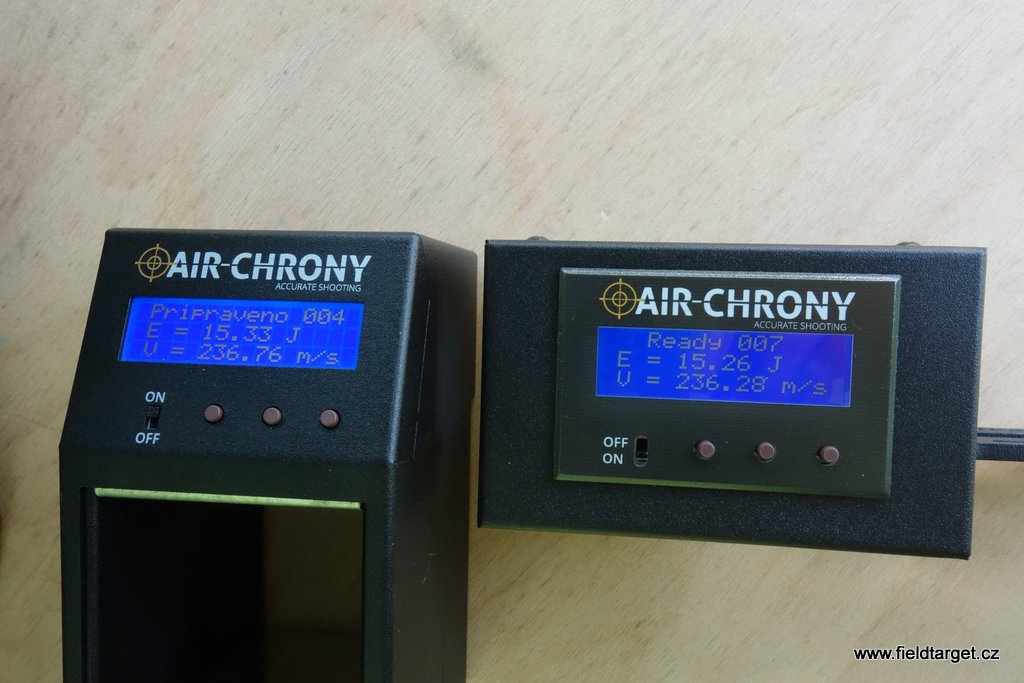 The Air Chrony Mk1 is a simple instrument, but it has a surprising number of features that are exactly the same as the Mk3. It is attached to the mouth of the barrel by means of enclosed rubber bands or simply by taping. The way of attaching would certainly deserve even further development, on the other hand, this design is absolutely versatile and I consider it better than the case in the case of Combra, which I have seen a nice few shot. Gripping at the end of the barrel is quite a significant advantage of the model Mk1. When attaching the chronometer on the barrel is no need to hit the hole as with his larger brother, and this is quite a nice feature, especially when prolonged testing weapons and ammunition. The manipulation is then much more comfortable and it is also possible to shoot aimlessly at the target.

AirChrony is easy to operate with ON / OFF switch and three function buttons. From the user's point of view, it is enough to switch the device on and then shoot through it, and all calculations are performed by the device itself. After each shot, the display informs you of the speed V [m / s] and the kinetic energy E [J] just reached. For proper display of kinetic energy it is of course necessary to set the weight of ammunition you use, which is set in hundredths in the range of 0.25 - 50 grams. 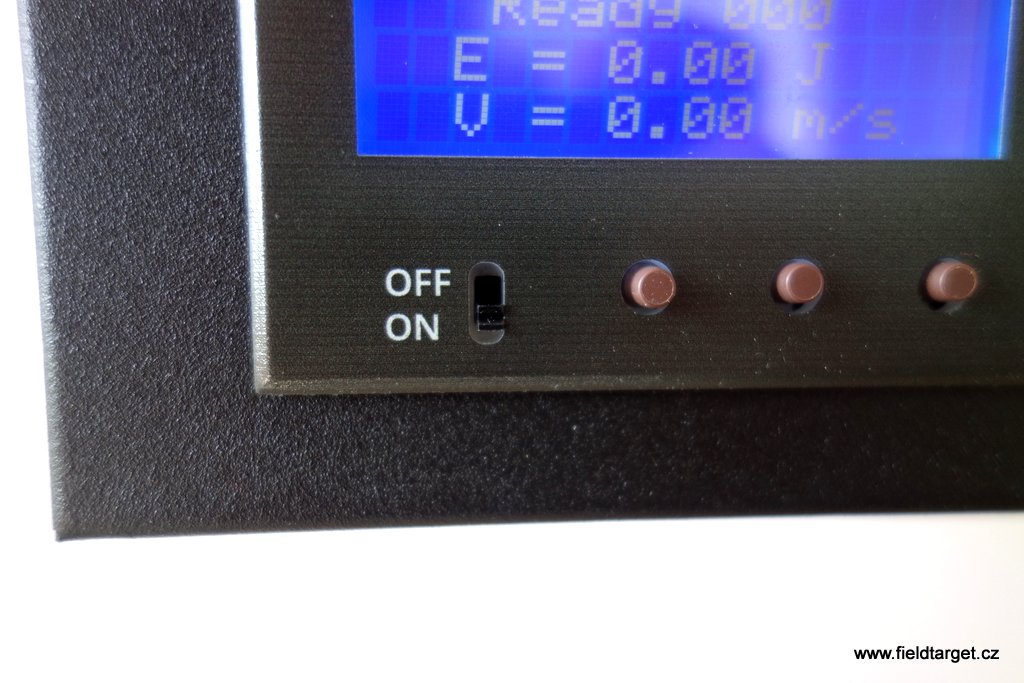 After firing multiple shots, you have the opportunity to view the data stored in memory. The display shows the number of shots, average kinetic
energy Esr [J], average speed Vsr [m / s], minimum speed Vmin [m / s], maximum speed Vmax [m / s], consistency dVsr = | Vmax- Vmin |, and mean
SV consistency [m / s] (standard deviation). In addition, you can also call up the speed in feet per second V [fps] or the RoF (cadence) rate RPS (cadence per second) RPM (cadence per minute), which is not much air rifle, but is useful for airsoft guns.

Probably everyone who uses classical chronometers encountered a problem with the reliability of measurements in cases where the sun shines directly or indirectly, or the sky irregularly obscured by clouds, etc. Unlike other devices, AirChrony has its own infrared illumination, it is not dependent on lighting and can be used to measure the velocity of the projectile regardless of its location and in any conditions, even at home in the room. This is a great tweak and a big advantage over the competition, where it is often necessary to laboriously labor in order to measure anything at all, and even then it is not yet certain whether the measured values are credible.

One of the biggest advantages is the internal memory, which can store up to 250 measurements. You can then transfer this data to your computer using a cable and further process it into graphs or back it up for later use. The output connector is a microUSB, so you can use a conventional mobile phone cable to connect it to your computer. The connector is also an input, so you can also update the software that the manufacturer sometimes improves. Another advantage of this connector is that it also works as a power supply, so AirChrony devices are no problem to power from a power bank.

The slogan "Resilience above all" is not worn too much today, rather manufacturers are trying to save where they can. But this is not the case with AirChrony, just like the MK3 flagship model, the MK1 is also unexpectedly robust. Regardless of the higher weight, the electronics are covered with steel sheet and the guide rail is made of aluminum sheet, no plastic is available here. The manufacturer obviously knows that the device used outdoors in nature and under a variety of conditions is often not treated very nicely.

User-friendly comfort is greatly enhanced by the practical cordura pouch, which protects the device from damage when it falls to the ground and from scratches from other aids and all the necessities found in any shooting bag. 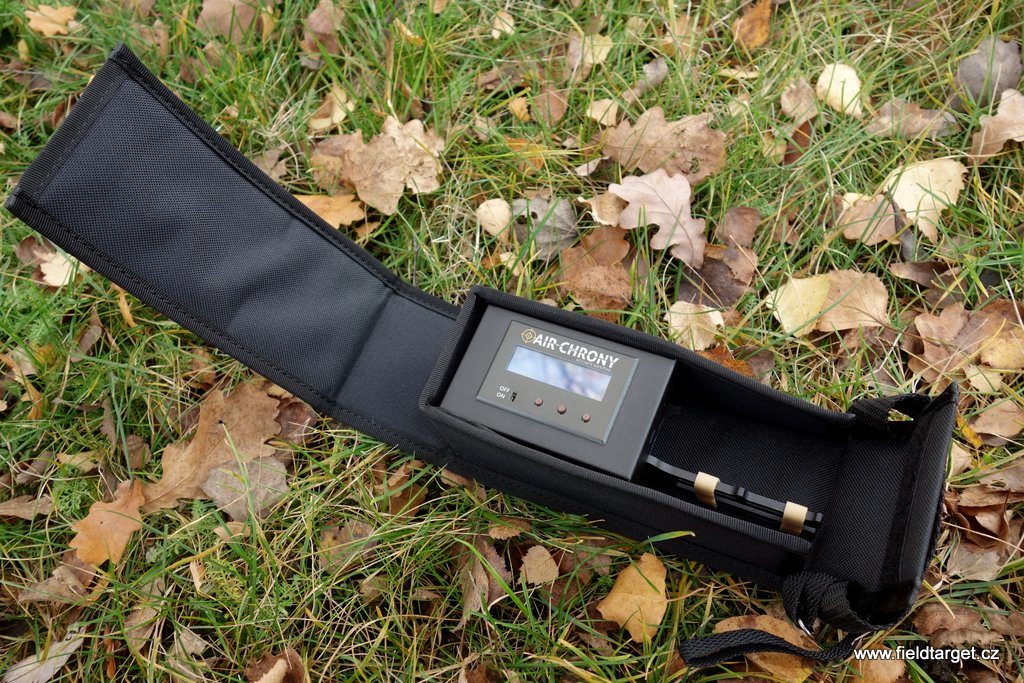 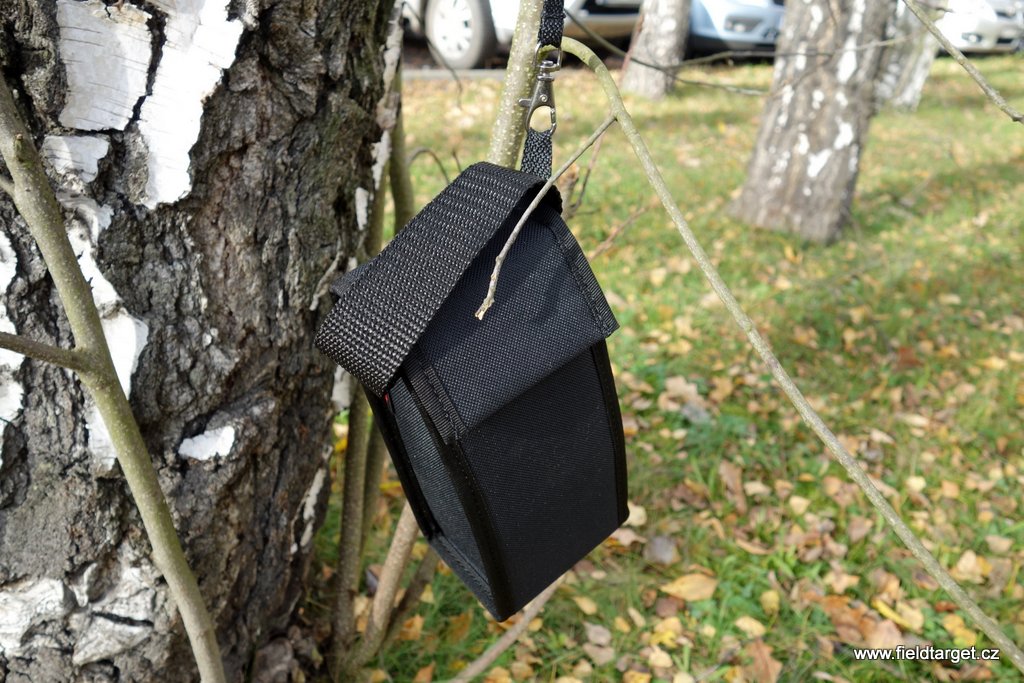 Air Chrony is a purely Czech company and its instruments are manufactured in the Czech Republic and exported to the whole world. In conclusion, I just add that it is an excellent tool, which sometimes needs a shooter who is serious about shooting. The Mk1 outperforms the competition mainly by its robustness (indestructibility), small size, USB connector and a high degree of reliability in unfavorable conditions.

If the goods are in stock, then ships in 2 working days after receipt of payment!

Air Chrony are so good quality that we can guarantee the immediate exchange for a new one in case of a justified complaint.

Air Chrony, your assurance of quality.